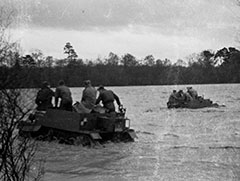 Blog 10 is a transcript of Podcast 10 combined with an unpublished article that Oliver wrote about the Pioneers and six feet of water.

Leave for a week

Back in the UK, we soon got off the ship and entrained for Whittlesford, just outside Cambridge. As soon as we got there we were able to phone up and tell our folks we were home. After a few days we were given leave. So I had a weeks leave at home. It was the first time I had been back for a while, which was enjoyable.

January 1944: Preparing for D-Day (retraining and re-equipping with self-propelled guns)

Of course, we then started to re-equip with 25 pounders. We were told that for the oncoming D-Day, we would be a follow-up division; that the 49 Polar Bear Division would assault on this particular area. It was commanded by General Barker, who was a relation of my wife. However, when Monty came back - he was still in Italy - and he looked at the plans, he said, "Well, I don't know 49 Div, but I do know 50 Div...", which was our Division, "...and 50 Div will assault." Well, this meant that we then had entirely to re-equip. We got rid of all the 25 pounder towed equipment and had to re-train and re-equip with self-propelled guns, basically like Shermans without the tops. This was because for the Assault Division, the three Field Regiments had to do what was called a 'run in and shoot'; they had to fire on the beach from 8,000 yards as the landing craft closed. We were told that we only had to learn self-propelled guns briefly because after the assault phase, we would revert to our normal equipment. Knowing the Army, nobody believed this and it never happened. We stayed the only Field Regiment in an Infantry Division with self-propelled equipment.

At the time, the other two Regiments in the Division, 74th Field and 124th Field were not regarded as capable of learning the new stuff in the time available. 90th were thought reasonably bright, so we had to do this. And the 86th Field Regiment and the 147 Field Regiments, both of which were self-propelled. The 86th were I think the Hertfordshire Yeomanry and the 147 were the Essex Yeomanry. I always thought they paid more attention to their Yeomanry donkey-walloper history than they did to the more important thing to me of being members of the Royal Artillery. That as may be, they stayed with the Division for the assault phase.

February 1944: Waterproofing course in Rhyll and testing the tanks

Then we started training on these things. I went on a waterproofing course up at Rhyll, which was a rather wet and windy place to go to in February. And we were taught about waterproofing: A vehicles, which were armoured vehicles, to make them watertight and waterproof; and B vehicles, which were ordinary trucks, really just to make them capable of running in the water. During the course of this one of the chaps on our course was momentarily pinned between two tank tracks, one of which had jumped the blocks when it was being tested. Although the chap was pinned and in great agony, he was eventually released and found to have nothing broken. But it put him out of the D-Day operation.

When we had finished doing our tanks, we then took them up to a lake somewhere in the Welsh hills where they were tested. All the vehicles had to have a tow rope in case we hadn't done the job properly, and they had to be towed out of the water. It was rather a strange sensation sitting in the tank with the hatches shut, going through the water and seeing the level of the water rise over the periscope. But of course the chap out at the top was still above the water, but it gave you a feeling a bit like being in a submarine. Anyway, ours was all right and we survived that course.

Part of the waterproofing kit, which was issued for our guns - Shermans - included a length of detonating fuse, which went the length of the barrel. The object in a real Sherman being, when the plug was pulled, to discard the various bits of hardware and to tear the bit of blue fabric that had been stuck over the barrel of the gun. Well of course, the Shermans issued to us were what were called OP - Observation Post - Shermans. And they had a dummy gun, which was made of thin metal to give more room in the turret.

Well, one of the Batteries had a spare set of one of these kits and thought they'd try it out. So they fired it all off, and were distressed to find that the detonating fuse, which had run the length of the barrel had cut a hole in the length of the sheet metal all the way down. They had to explain why it was that they needed a new dummy gun.

March 1944: Run-and-shoot exercise at Studland fired in the wrong direction

We had all these exercises and things, and we used to get to load at Poole Harbour and then go out and do all sorts of exercises assaulting principally Studland. We assaulted Studland on various occasions; eventually, we did an exercise for the demonstration of the run-in shoot, where everything was laid on. The big noises - the Divisional Commander and everyone else, in order of hierarchy - were embarked on a Naval ML (motor launch), to be 1,000 yards offshore to watch the fall of shot when we fired live ammunition for this run-in shoot. Well, we were formed up in six landing craft, each with four of our guns on board. The Navy were in charge of the operation. So we came into position and the Naval Navigating Officer gave the order to fire. So 24 guns all fired one round in the direction of the shore. And almost immediately the order came through to stop, which meant just that. And we found out that the entire 24 rounds, instead of landing on the beach, had landed all around the ML, fortunately not hitting it. The Naval Navigating Officer had plotted the flotilla's position in the wrong 1,000 metre square on the chart. We thought it was hilarious because nobody was hurt and we were all absolutely in the clear. But I think that the Naval Navigating Officer must have got a terrific rocket when he got home that night.

Pioneers and six feet of water

On one of the Fabius exercises at Studland Bay our LCT (Landing Crafts, Tanks) was due to beach, but for some reason I was not having to go ashore in my carrier. However, a section of the Pioneers (3rd Pioneer Battalion of the Canadian Army) under a Sergeant had orders to do so. When the LCT grounded, there still seemed to be quite a lot of water between us and the beach. The Pioneers, who were heavily loaded with picks and shovels etc. were reluctant to take the plunge. The lads encouraged their Sergeant with: "Show us the way Sarge!" and "Set an example Sarge!", as a result of which he stepped off the ramp and disappeared in about six feet of water. He was rapidly hauled out again and NOT followed by his section. The LCT had grounded on a sandbank, leaving deeper water between it and the real beach!

Getting stuck in a bog with Major Gilbert Wells

One of the other occasions - I was in these days operating with the Bren Carriers, I had a light track vehicle - and we had gone ashore. Just in behind the shore at Studland it is very boggy. And we were supposed to have been going inland but we had got hopelessly stuck. We couldn't seem to get it out and were wondering what to do. We looked up to see the imposing figure of Major Wells, our Battery Commander approaching, and I thought, 'Oh dear, I'm in for a hell of a rocket now'. But he was all smiles and came up and said, "I say Oliver, can you help me? I've got my Sherman stuck." So between us we extricated ourselves and blame was avoided.

The number of things that went wrong on those landings probably were beneficial in that they avoided the same things actually happening on D-Day itself (6th June 1944).