Some time ago Oliver wrote a detailed account of D-Day. The manuscript is a faded copy of an old typewritten document. Compared to Blog 11, it contains additional details about his experiences on and after D-Day.

Oliver also wrote an account of his participation in the 50th Anniversary of D-Day on 6 June 1994. 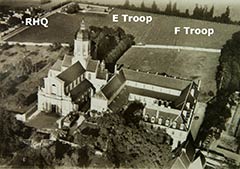 After some weeks of this training things began to settle, and we were split up. As a forward observation officer, I was going to go off with the Bren Carrier and meet up with the regiment on D-Day after they had landed some hours later; I was due ashore at H-hour minus 4 minutes to give fire support to the first battalion of the Dorsetshire regiment, who weren't due ashore until H-hour. What I was meant to have done in the four minutes that I was going to be there, I don't know. (NB: H-hour was the name given to actual time of the planned airborne assault).

Engine failure in the Channel

But of course in fact, I was still in the middle of the Channel. Although we sailed leading the fleet more-or-less half way across the Channel, the chief engineer came up to the Captain and said, "Port engine has stopped." After a bit it was, "Starboard engine's stopped", and then he said, "all engine's have stopped." Whereupon we stopped as well because there was too much water in the hold and the ship wasn't fully sea worthy. So there we were.

The whole of the fleet went past and there we were in the middle of the Channel. We kept wirelessing for help but nobody took a great deal of notice, which was understandable. Anyway, we spent a rather uncomfortable night adrift in the middle of the Channel. Nobody ran into us fortunately. The naval officers were the Captain and the midshipman (a Lieutenant and a midshipman), who had little bunks in a cabin. But they were busy on deck. So I spent the night in the Captain's bunk.

6 June 1944 D-Day: Anchoring in a swell, and chopping off the anchor

I was awakened early on the morning of D-Day by the unpleasant feeling of salt water coming through the deck onto me from above, which I thought meant it was time for me to get out, which I did. What had happened was that the instructions they had eventually got from Portsmouth were to anchor and await instructions. So they anchored in the middle of the channel in a swell, which meant that as the swell rose, a certain amount of seawater came in over the stern. That was thought not to be a good thing. So the Captain instructed the Chief Engineer to haul up the anchor, to which the Chiefy said, "Sorry Sir, can't, we haven't got any power." So they got out an axe and they chopped through the cable.

Clear sky on the night of D-Day

From that time we were free as you could wish to be and drifting up the Channel. Which we proceeded to do for a couple of days until eventually somebody took pity on us and sent out an ML, which towed us into Shoreham. In the meantime we had had various offers of help from Air Sea Rescue Walrus, which came above. It didn't land but asked if we were in trouble, which we weren't. We did have a magnificent sight on the evening of D-Day, which was a clear, nice evening. We saw the reinforcement flight for the 6th airborne division of stores and stuff coming over in gliders with the large gliders, the Hamilcar's being towed by Halifax four engine bombers and various other things, Horsas being towed mostly by Albemarles I think it was. It was really rather a magnificent sight.

Anyway, we eventually found our way back to Shoreham and were accommodated at a gunner camp not far away. I perhaps foolishly allowed my signaler and driver both of whom were Londoners, to go back to London. Both of them promised faithfully that they could be back down on the next train if I rang; they both gave me a telephone number. Well, we were there for a bit. We were given movement orders so I rang Gunner Horner the Signaller, who as good as his word was down on the next train within an hour or so. But when I range Lance Bombardier Smith, there was no reply.

Eventually we had to go. Horner, although a Signaller driver, said he couldn't drive. So I had to drive the Bren Carrier; we had to go to Southampton to be re-embarked. The number that Smith had given me was a warehouse, where his father worked. But as it was a Sunday, he didn't answer the phone. Smith, who was a good chap realised after a bit that there was something not quite right, so he then reported back, by which time we had gone. He was some days behind and of course was on a charge when he eventually got back to the Battery. Battery Commander Gilbert Wells was very fair, and apart from reducing him to the ranks, he hardly even gave me a reproval of any sort, which he should have done really. But anyway, that one sorted itself out.

Eventually I was allocated to an American LST (Landing Ship Tank), the biggest thing to put the Bren Carrier aboard and I wasn't that skilled. Of course the Bren Carrier had sort of hardware sheeting all around it so that the visibility out of it was extremely poor. I was presented with this bare, empty, barren looking place to go into on the LST. I thought, "well I won't back down into there; I don't know what might happen. I'll drive down and do a spin turn", which is normally quite easy on a Bren Carrier. What I didn't realize was the fact that it was equipped with rails for taking railway trucks. So when I did my spin, I could easily have pulled the tracks off the Bren Carrier, which would have been a severe black mark. Anyway, I managed that one all-right.

18 June 1944: Crossing to France on the LST and eating milk pudding

On the way, Horner and I had spent a night on the road. We were fully equipped with food, because there was lots of food on the LCT and the sailors were all sea sick so they didn't want any. So we had equipped ourselves with a considerable amount of compo rations. And I always remember on that occasion, Horner and I shared a tinned milk pudding, which I think was about 8 men's ration.

Eventually, we got across and the LST beached until the tide went out and dried out, by which time it was of course dark. We set off - I knew the general direction we had to go. But there were all sorts of signs, which kept diverting us. Eventually we got fed up and pulled into a field and put our blankets and sheets down and slept. Eventually we made our way back to the Battery in the general direction of Bayeux in the morning and re-joined the Battery.

I had been away I suppose for at least a fortnight from the Battery and all I had were the clothes I stood up in and a few bits and pieces. My main worry at the time was cigarettes. Knowing that NAAFI wouldn't be along for a bit, I had sealed up 50 tins of cigarettes in all my individual bits of kit, which were with the Battery. So my first observation was to say, "Where is my kit?" to which they replied, "Oh bad luck, it was in a half track that fell in a shell hole on D-Day." So off I went to the deceased other ranks kit depot and kitted myself up a bit. But the cigarettes were a dead loss. The only odd thing was that after that I kept seeing other officers wearing identifiable bits of my kit. Quite obviously, when they arrived and I wasn't there as I should have been, they said, "Oliver poor sod, he's had it, he won't need it," and they had obviously helped themselves to the better parts of my kit.

Smelly cheese in the Sherman

Anyway, after that things began to settle down, and we were in this gun position at Juaye-Mondaye. We were pretty busy most of the time, but on the odd occasion we had free time and made occasional trips into Bayeux to buy cheeses and butter and things, which were about the only products that you could get. I bought several Camembert cheeses because I rather like them. By now I was operating with a Sherman, because as we were with infantry, the troop commanders who were meant to have the Shermans didn't want them because they made themselves really conspicuous. So they had the Bren Carriers, and the troop leaders such as myself had the Shermans. So I had my Camembert cheeses in the turret of my Sherman.

On one occasion, Gunner Horner, who was the wireless operator, came to me saying, "Excuse me Sir, I am trying to net the radio in the tank, but the smell of your Camembert cheeses is putting me off, do you think you could move them?" So I did.

During the period there at Juaye-Mondaye we were adjoining a very big abbey, which had some refugees from Caen in it. We never actually had any contact with the abbey back then. But years later, my wife Philippa and I went and looked in, and it was a magnificent baroque abbey with an equally magnificent organ. So we bought a record of the organ playing, which we still have and play because it was so good.