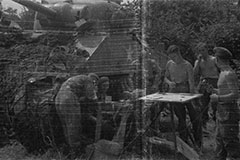 Once or twice while we were based in Normandy the troop commanders who were normally up with the infantry and a bit stressed were given a bit of relief by one of the more general officers doing a spell up in the OP - the observation post. On one occasion in Normandy I had to do this. It was quite quiet. We had a ruined building of some sort where we looked out. All that I remember is that we looked out on the Chateau de Balleroy, which later on was bought by a very wealthy American millionaire who kept his supply of hot air balloons there. But at the time, it was inhabited by the Germans. We didn't have much to fire at, but we did fire a bit. By night things tended to get a bit lively and our OP party retired to the field a little bit further back where we had a slip trench of sorts. I think we all must have got into it because there was Bombadier Waters, who was the technical assistant, me and Gunnar Winnard the Signaller and I think somebody else. We got into this slip trench and then there was a certain amount of shelling or morphing going on. Each time a few dropped near us we tried to get lower in the trenches, which should have been dug deeper really. Anyway all was well and we survived. We didn't see a great deal.

Under fire on a liaison job with the Gloucesters

On another occasion I'd been detailed to do a liaison job with the 1st battalion the Gloucesters who were in 56 Brigade which at the time constituted part of our division. I can't remember what I was meant to do but I had to report and wait round about the Head Quarters of the Gloucesters. We were in a field which sloped down towards the enemy southwards where there was a stream and a wood and on the side of this sloping field was a hedge with a very slight pretence of a ditch. Well nothing much happened very often but one night quite a lot of stuff was coming over and we hadn't really dug in properly so we all went across - about four of us - and lay down in this slight depression, which you couldn't even call a ditch. As each round fell somewhere near, those near the top of the column eased their way down a bit, making those below ease a bit further until the chap at the bottom, said "don't come down any further - my feet are in the ruddy stream already". Anyway we survived that one.

On the same expedition I was with the same battalion in a field about to put my bed down in the slip trench. Then all of a sudden I heard this shhhh as a couple of bullets came across and to my surprise I suddenly realised that the second one had hit me in the back just as I had bent down to put my jacket down in the slip trench. Anyway I immediately felt some surprise but no pain or anything so I said "that one seems to have hit me". The infantry were very good and rushed me to the RAP (Regimental Aid Post) where the doctor had a look and took my shirt off and so on. The bullet had gone in just about 4-5 inches underneath the skin without going in my ribs or anything and he very kindly marked where the bullet was with a chinagraph pencil so that the hospital would know where to look for it if they wanted to dig it out.

Anyway I didn't suffer any pain or grief but I was taken back to the casualty clearing station (203 Field Ambulance) on 16 July 1944 and eventually found myself in the hospital in Bayeux. I didn't have any treatment at the time. In the morning about four of us were inspected by a rather senior officer who looked at the hole where the bullet had gone in, prodded it with his finger and said "superficial - discharged". Well I should have told him that the bullet was there because I knew where it was but couldn't show him. There didn't seem much point because he seemed an awkward so and so. He was rather senior and I didn't see much point in arguing the toss. The only trouble was, as an officer, to have allowed myself to be discharged on 19 July 1944 with a totally superficial wound was rather disgraceful, but still I went out and eventually found my way back to the unit and there the bullet stayed for many years. I was able to feel it with my hand after a bit, so I knew where it was.

Removing the bullet in Manchester in the early 1950s

It wasn't until we were living up at Manchester in the early 1950s it began to get a bit annoying because if I leaned in a hard chair it would wobble about a bit. I eventually went to my GP who with a certain amount of difficulty removed it. When he tried to cut into it, it moved because it had formed a layer of hard skin or something. But eventually he dug it out. I was very apologetic about wasting his time and he had a dresser, a sort of assistant paramedic, and I said I'm sorry to keep all these people waiting and the dresser said "you don't want to worry about them - they're the Monday night lot!"

Anyway a 9mm bullet could have been fired easily either from a German submachine gun, a Schmeisser (MP 38 or MP 40), or a Sten Gun. I think it could have been fired accidentally by one of our troops in the next field. The Sten Gun was a dangerous weapon and if dropped on its butt it would fire about three rounds willy nilly, so I still have the bullet. I think it was an accidental firing by our troops.