Blog 13 is a transcript of Podcast 13 combined with an unpublished article that Oliver wrote about motorcycling over the Seine. 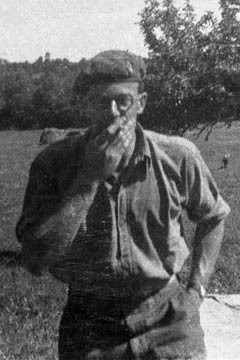 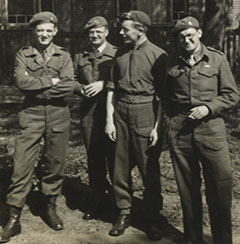 During the first few weeks in Normandy not a great deal happened, but we did fire a lot of ammunition. I do remember if I was off duty and was sleeping at night, I would wake up; not because the guns were firing but because they had stopped. Which was rather unusual. But I reckon we threw ten shells over for every one that they threw at us, which was a satisfactory relationship. One day we were all deputed or allowed to go into Bayeux to have a bath - to the communal bath unit. So we undressed and went into this sort of space, which had lots of pipes running in all directions. Somebody then turned the hot water on and we all got underneath and soaped ourselves in all directions very rapidly. And when we were all thoroughly soaped up, they decided that they couldn't afford any more hot water so they turned it off. And we had to dry ourselves off and go home as best we could, all soapy. That wasn't a great deal of fun.

On other occasions we went into Bayeux for a bath. First of all there were some rather wonderful antique individual baths - each a bath in a little hut around a square. I think there were about five that were really quite old fashioned. If you went in and paid a modest sum they would heat the water up and you could have a nice bath.

American and RAF bombing formations over Caen and Aunay-sur-Odon

Eventually after several weeks of slightly monotonous time in Normandy, during which of course we did get a view from time to time, the Air Force were bombing Caen (on 7 July 1944) and the area around it. It was rather interesting because when the Americans were bombing it, their B17s and B24s went over in tight formations; you know, when father says turn, we all turn, and they all dropped their bombs at once. But we did see a few of those knocked down. When the RAF did it, in Halifax bombers and Lancasters, each chap was bombing individually. They flew in from different heights and angles, and we never actually saw one of them get hit.

But later on we did see, to some extent, the result of the bombing. Because when we eventually started to move forward after two or three weeks, we came to a place called Aunay-sur-Odon, which they had so demolished (on 12-15 June 1944), it took a day or so for the sappers to clear the ruins enough for us to get through the village. When the move did start, I can't quite remember when, but we started to go forward to another position. On the way, it had only just been cleared and the sappers were putting white tape down the sides of the roads by the verges to show that that was as far as it was cleared for mines.

Tanks crossing a narrow bridge, and then a mine

We proceeded along this for quite some time, and eventually came to a bridge over a railway line, which wasn't wide enough for tanks. So the sappers had removed the side-walls of the bridge, and merely put a tape down each side. Well, as I looked down from the turret of my Sherman, which just about fitted, I could see a Cromwell tank lying on its side down below, which had obviously gone over the side. It was lying on the railway line minus its turret.

Anyway, eventually we pressed on and I had the four guns following and from time to time I could see that they were still with us. Then at one stage I heard a bit of a thump and saw a cloud of dust and I thought "Oh crikey, one of them has run over a mine". Well it had, but it hadn't done it that much damage and it proceeded. The chap said that they just felt this thump and the whole thing rose slightly in the air, and all the dust and muck of accumulation lower down in the SP all rose up. But anyway, they survived. Not very far beyond that we came to the gun position and turned into a field and as we turned in onto the gun position the track on that particular self-propelled gun broke down, but it was able to be repaired. That was quite an interesting drive.

When I got to the other end, I said to my driver, known as Curly because he was bald, "Hey, that bridge was a bit hairy, wasn't it?". He said, "What bridge?" He had driven over this with inches really to spare on either side and he hadn't realised that he'd been over a bridge at all.

August 1944: Motorcycling over the Seine

Soon after passing South of Falaise we had rested for a day and were to do a night move towards the Seine. For some reason I was excused the Orders Group preceding the move. When we were about to move, my opposite number as head of E Troop, Eric Morrow, said "Gilbert Wells (the Battery Commander) says we have got to ride bikes". We normally travelled in Shermans, and I was a very unskilled motorcyclist. So I said "I don't know that and you haven't told me!" I travelled in the Sherman and Eric had a trying journey all night on a bike. Nothing was said, but the following evening, prior to crossing the Seine, the BC looked at me and said "Oliver you will ride a bike!".

We had been in a muddy field and it had rained all day. Before I ever got to the road, I had to scrape the mud from between the wheels and the mud-guard to enable the wheels to go round. Then out onto the road in amongst the tanks and the self-propelled guns. Later, on the bike in the dark with the barest lighting, was an experience that I never wish to repeat: I haven't ridden a motorcycle since.

As we progressed in the liberation run so to speak, we were passing through the area of the battlefields of WWI with marvelously preserved cemeteries. We had self-propelled guns which were very rough on what they were travelling over. As we went past one of these there was some very fine grass mowed at the edges which some of our chaps cut across and didn't improve. Later on at the back of the column was troop commander John Cook and he was surprised to see an old chap waving his fists at us so we thought this must be some rather irritated old French peasant. Anyway we pulled in and it wasn't a French peasant at all but an ex-soldier of the First World War employed by the War Graves Commission to keep these graves in a good state. He was furious. He said "I've been here all through the occupation. The Germans have been as good as gold, never given me any trouble, always been helpful and your blokes come along and look what they've done to my grass." Anyway John mollified him and gave him some tins of bully or something and on we went.

3 September 1944: En route to Brussels and prisoners at Mons-en-Pévèle

Later on, near the Belgian frontier on the way to Brussels, the infantry reported that there were some German troops crossing in front of us. In fact it was the Luftwaffe, an airforce anti-aircraft regiment, who had no idea that there were any allied troops within 50 miles of them. Anyway we stopped and our number one gun, Sergeant Scott, in charge, did what's called an open site shoot. It was the only time we did one during that campaign, in which the chap behind the gun can actually see what he is firing at. We fired a few rounds and before very long we found we had quite a number of Germans, who were very surprised to be taken prisoner and find that they were mostly relieved of their watches and items of that sort. The only thing was, when they fired the first round, we were in a little hamlet, which hit one of their trucks, which was by a shop window. The blast of our gun shattered the shop window, so bits of broken glass were falling down in all directions.