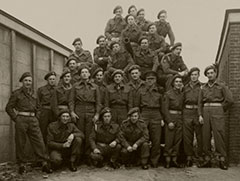 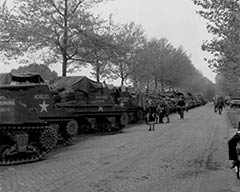 January 1945: Patrolling the Rhine in Holland

Around about that time, we moved along the Rhine further along in the Roosendaal area, where we patrolled or supervised quite a large area of the river with various odd troops that could be spared on the ground. Quite a lot of the Royal Airforce Regiment occupied one area, not very efficiently, because it had been cleared and then became un-cleared. Also, some rather strange battalions, one of which I think had been composed of anti-aircraft gunners, who were now thought no longer to be necessary. Their first casualty along the bank of the Rhine was by a gunner putting up a blackout shutter in his billet, with the light on behind him; he was shot through the hand as he put the blackout shutter up.

March 1945: Regimental HQ at Vlijmen and trips to Belgium

Towards the end of 1944 the re-enforcement situation got so bad that the division had to be broken up. Our division 50, the TT division, which had worked very hard for a long time, was thought to be tired and was selected to be the one broken up. As a result our regiment became an army field regiment which came directly under Canadian Core command, which meant we were moved down into Holland. We had our regimental head quarters in a small town called Vlijmen. It wasn't very exciting. We went to various places like Roosendaal and others along the frontier.

We had occasion to go across into Belgium quite often and we couldn't help being amused by the fact that that the Belgians had thought that the Dutch were terribly boring and didn't know how to live. Whereas the Dutch thought the Belgians were extremely lightweight and thought of nothing but pleasure. But the fact was nothing was available in Holland, the Germans had cleaned them out. But in Belgium, particularly in Brussels, if you had money you could still get anything, whisky, cream cakes, champagne - if you had money you could get it. Anyway we soldiered on there for a while with one or two occasional excitements.

8 May 1945: VE (Victory in Europe) Day celebrated in Roosendaal

We had a fairly quiet time along there. I don't know how many months during 1945, but not all that long until VE day, which we celebrated where everybody celebrated, I think it was in Roosendaal. All the kids turned out on bicycles decorated with coloured paper and people had rather a jolly time.

Moving to the Ruhr and the Dortmund brewery

Military duties being no longer needed, before very long we were moved off into the Ruhr. Originally we thought we were going into a part of Southern Germany, which would've been rather interesting. But in the end we were moved to the Ruhr. Driving through Essen and looking at the remains of the Krupps armaments factory was quite a sight - the scene of utter destruction and desolation.

First of all I think we had billets in Dortmund. The advantage of Dortmund at this time was that the brewery was still functioning and was brewing beer to quite a high standard for the Wehrmacht, which we made the most of. We all had individual troop pubs, because the beer was very freely available. But good things don't last very long and before long the NAAFI moved in and reduced the gaeity very considerably.

On one occasion I'd had a few beers and went to use the wc which I thought was a door just adjoining the door into the bar. I opened the door and stepped in but it wasn't the wc, it was a flight of stone steps going down to the cellar, which I descended in one go, so to speak, and ended up at the bottom in amongst a few old beer crates, wondering what an earth had happened. But fortunately, dare I say having had a few drinks, I made a safe landing at the bottom without damaging myself. So I then went back and consumed a bit more beer.

Many years later, Philippa and I were on holiday on the island of Kos, one of the Greek Islands. We had hired bicycles and were going on quite a ride up a mountain. When we got to about as far as we thought we could go there was a cafe, which being Greece, had cold beer available. There was a couple outside. We were drinking this beer and I said to the girl "You seem to be drinking coffee but we think the beer is rather better". She said "well my job during the week is in the brewery at Dortmund so I see enough beer - I don't feel the need for it now". I didn't tell her that we had occupied her place of work at one time.

Our mess at this time was in an old Victorian mansion which was quite fun. We used to do terrible things. There were a lot of potted plants upstairs and when we'd had a few beers we used to throw these out of the window and watch them crash on the pavement down below. Pretty stupid but there it was.

June 1945: A school full of Russian prisoners and clearing out the debris

After a spell in Dortmund, we moved to Bochum. I think I had been moved into a different battery by then, into 357 battery instead of 465 battery. The troop commander Roy Johnson and I found ourselves responsible for a very large school, which was being used to house Russian ex-prisoners. It was a proper shambles and there was very little discipline there at all. Control was extremely difficult because only very few of the officers admitted to being officers and the troops were all chaps who had been taken prisoner early on and who had been working more or less as slave workers. They weren't allowed out because if they went out and found a German with a watch, they would probably kill him and take it. So they were a bit disgruntled at not being allowed out. And communication was difficult because they didn't speak any English. They spoke a little German, which they had picked up, and we had a bit of schoolboy German and that had to make do for managing things. There were very few of us in charge. The only officer of the ex-prisoners who had any authority was a naval officer, although we thought there were probably other officers who didn't admit to the fact.

One afternoon while they were still there, a Russian colonel attached to the divisional headquarters appeared - an imposing figure. He tried to bully me into saying all the troops could be let out. He said, "We are allies, why are you keeping my men locked up like this?" Well as best I could, I told him that if I let them out there would be hell to pay. And anyway my instructions were that they were not to be let out and that I wasn't taking orders from him. But he was a rather aggressive figure.

Eventually the time came when we had to move them. They were all taken off in trucks. But when they left, they left the most indescribable scenes of filth and chaos in their barracks. We solved this by applying to the military government, who sent a squad of about 20 Germans, who began by throwing everything out of the windows of this large building, and made a huge pile in the square and burnt the lot. That solved the problem.

Moving Lithuanian and Latvian displaced persons to catch a train

Round about the same time, I found myself in charge of a column of about ten 3-tonne trucks loaded with displaced persons, mostly from Lithuania, Latvia and so on. Mostly women and children. We had to get them to a railhead to catch a train. We loaded them onto about 12 trucks and set off. When we had gone some way, this dispatch rider came up alongside me and said, "One of them's fallen off sir, but she got back on the next truck". Anyway, we eventually got to the railhead and I went to find out what had happened and if the lady was wounded. But I never found anybody who had suffered in any way and in due course we put them on the train and they all went back to Latvia. None of them were at all happy to go. We naively assured them that they would be all right, but I think that in fact they were far from all right, because the Russians didn't really like these people who had been involved with the Germans. I never did know what happened to them.

Journey to Antwerp in an old truck with bad wiring

Sometime around about this period, the war had been finished in Europe but was still progressing in the Far East. I was a fairly low release number, and I was posted to go back to the UK, eventually to go out to the Far East. But the truck that the regiment had allocated to us was in a pretty poor state, and on the way back through Belgium it caught fire due to some bad wiring. Fortunately we were able to deal with this, with the aid of passing trucks, and I got back to Antwerp.