Blog 16 is a transcript of Podcast 16 combined with an unpublished article that Oliver wrote about medicals and the depot at Woolwich. 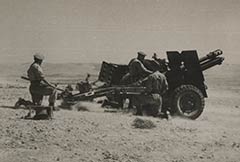 Belgium: Bruges and swimming at Blankenberge

Soon after this my posting came through to a re-enforcement unit, with a view to being sent off to the Far East, where the war was still progressing. This was in Bruges, which was a charming place. We had no military duties and a good officers club, so we ate and drank very well in the evenings. During the day we normally got the tram down to Blankenberge on the coast, which was a terrible place, but we would swim there and within very close limits. This was because an old Belgian boat cruised up and down and if the captain thought people were going out of their depth, he got the oar out and pushed them back in again! So that was our main activity there for a while.

September 1945: Medicals and train to London

Eventually movement happened and we had to leave the BAOR (British Army of the Rhine) and go back to the depot at Woolwich in the UK. On the way back there, I think there were about 20 of us, and we were told that we had to have a medical, so we all went into the medical centre and the the doctor looked at us and said "If I give you all a proper medical, only one of you will catch the train into town. If on the other hand you all feel fit and are prepared to be marked 'passed fit', you'll all be able to catch the train. Get your pay books out and I'll sign them". So we were all immediately passed 'fit' and set off for London on the train.

The depot at Woolwich, indefinite leave and mumps

I've got two memories about arriving in the depot at Woolwich. I checked in and was told that there was no draft at present, but that I would be in B battery and on parade twice daily at nine o'clock and two o'clock. This was not very encouraging, so I went off to the mess for a cup of tea to console myself. While I was there some of my chums arrived looking very cheerful and said "We've all been sent on indefinite leave". So I thought what was good for them is good for me, so I went outside and checked in again, without saying that I had already checked in, and I was sent on indefinite leave too, which seemed quite satisfactory. While I was on leave (back in Bristol) I met or was in touch with my niece Frances, who had been suffering from mumps. Well, I'd never had any form of illness until then in the war and thought nothing of it. I had eventually been told to report back to the depot on a certain day. I woke up that morning and my neck was swollen and when my mother came in to wake me I said "Well I'm not going, I've got mumps". So I rang up and they said "Well that's alright, come back when you are fit".

Drafted to the Middle East: Stuffy Dafour, journey through France and blankets

Another week or so went by and I eventually reported back and they said "You're on a draft to the Middle East. Assemble at Topsham Barracks in Exeter on such and such a day", which I did. This of course was the barracks in which I had started my military career. About 20 of us - all war-time commissioned lieutenants and one captain - assembled there on a rather gloomy evening and we were amazed, because all of a sudden in came a military figure, Captain Dafour, known in the regiment, later on apparently, as Stuffy Dafour. He had been wounded and taken prisoner at Dunkirk, so he was starting his soldiering and war all over again, which was very boring for us. Anyway, he was in charge of the draft and we eventually got on a train which was to take us to New Haven. Each time the train stopped he got out and had a look to make sure people weren't trying to skip, but of course we knew there was nothing they could do if they did and we weren't that bothered. He was a very military figure with a big cap, a riding mack, boots, swagger cane and all the rest of it, but he was a bit boring.

Anyway we proceeded on this thing and eventually, after crossing the channel, got onto a train at Dieppe and set off across France on a train route called Medlock(?), where we stopped twice. We were using rail lines which were not too busy. We stopped at camps to be watered, fed and washed and so on. We eventually got down to somewhere in the Toulouse/Marseilles area and the train was halted. There was a Frenchman there who was running up and down the train acquiring blankets, which belonged to the train not the blokes. He was buying these for some ridiculous price and we saw him running up and down the train and putting a pile of these blankets into a little shed. Well, one of my colleagues couldn't stick that so after a bit, when the pile of blankets got quite large, my friend nipped out of the train, gathered the blankets up and took them back onto the train to the dismay of the chap who had bought them when he came back.

Eventually we went on a vessel across to Alexandria in Egypt.