Blog 4 is a transcript of parts of Podcasts 3 and 5. 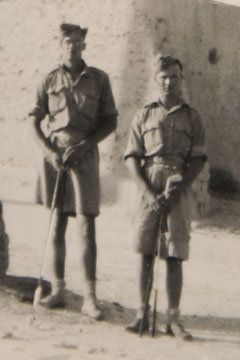 May 1942: Oliver (left) playing golf while at number five convalescent camp at El-Arish.

We were sent on a sort of patrol, it was March 1942. There was a convoy going through to Malta which was in dire straits. A series of small attacks were laid on. The principal object I think was to attack the Luftwaffe, to attack us, rather than to attack the convoy, in which they were very successful. We went out and as far as I remember, fired a few shells at Martuba Airfield, having been told there would be Royal Air Force support. While we were there, while we were just sort of starting, aircraft could be heard. Usually if we saw aircraft they were Macci 200 fighters or occasionally ME109's. But on this occasion my chum said, "oh the RAF is here" and I said, "no, we are mistaken, it is not the RAF, they are JU87 Stukas". After that, we had a bad day and our operation was not very successful in shelling the airfield, but at least we attracted the Luftwaffe.

During the course of the day - it was one of the few places where we hadn't dug slit trenches, because the ground was too hard. And I was trying to make myself as flat as I could when one of the attacks was on, and felt as though I'd had a bit of a kick up the backside, and I had in fact been slightly wounded in both legs. Eventually, the situation calmed down a bit, the Bofors fired away like mad but I don't think we ever hit anything. At one stage I watched our guns being attacked by some ME's, and noticed for the first time that they were the later mark of ME's, the ME190F as opposed to the 109E, which we had seen before. Anyway, a piece of one of their cannon shells neatly took a piece out of my boot but fortunately without touching me.

Eventually things quietened down and we set off in an easterly direction, having suffered a fair number of casualties. Eventually I found myself in Tobruk hospital, which was rather a primitive establishment. It was more like a casualty clearing station really. It had been an Italian hospital but was modified. The first evening in, the orderly came in with pyjamas, which were not normally worn by troops at that time. He said, "Here you are - pyjamas. You can put them on, the Duke of Gloucester is coming round in the morning." So, we all slept in pyjamas. In many cases, I think people had never worn pyjamas in their lives. In the morning the orderly came round and said, "Let's have them back, the Duke is not coming." So the pyjamas were all handed in again.

We were there for a few days, and there was usually a Stuka raid on Tobruk harbour at about two o'clock in the afternoon. Anyway, the day we were to go, we were moved out on stretchers in Lighters in the harbour, in rather warm sun by now, late March. Eventually the Lighter was pushed across to the hospital ship which was the Llandovery Castle, an old merchant ship. We were hauled aboard, two stretchers in a little box at a time by the donkey man, who just swung out his jib with a cable, hooked us in and we were hoisted up and loaded, just like cargo. We got on board and found beds or bunks in sort of wards, and set off. Sure enough, round about two o'clock, the Stuka raid started, just as our ship was in the mouth of the harbour. We had a near miss, which not being used to near misses as the Navy were, felt as if the ship had been struck, which was a bit alarming. As I had my leg in a plaster, I was prepared to get out but I wouldn't have been able to swim very far. The main thing I remember about it was the sight of seeing a Naval nurse, a rather big girl, wearing her Mae West life jacket and steel helmet running through the ward, which was a rather alarming sight in itself. Anyway, all was well and we set off in the general direction of Alexandria.

After a bit, the Sister came round and looked at me, and she said, "Is there any reason why you shouldn't shave?" Well, I hadn't shaved for about ten days. So I said, "Well, no, other than the fact that I have no kit." "Oh", she said, "well I'll see what I can do". So she returned in a bit with a basin of very luke warm water and a razor. No soap or brush or mirror. And she said, "Well, you'll have to do the best you can." So I hacked away in a rather desultory and uncomfortable fashion and eventually gave up. And she came back and looked at me, and she said, "Well, you look a lot younger." As I was only 22 at the time, and I never saw what I had looked like before, it was quite amusing.

Eventually we got back to Alex and we were unloaded. I found myself in a nice clean ward in the 63rd general hospital at Helmiah, a suburb of Cairo. I was issued with my blue sort of pyjama suit - a jacket, trousers and a white shirt and a red tie. I put these into my locker as best I could. After a bit, a rather objectionable as I thought, Matron I suppose - she wore the crown of the Major. She came round to me and she said, "A disgusting kit, disgusting." I didn't know what she meant. She meant that they had a specific way in which they arranged their kit. The blue trousers were folded and the white shirt and the blue jacket above. The red tie was pushed in to make a sort of stripe down either side. Well, nobody told me that. And that was the only time that I was in the ranks in the Army that I was ever reprimanded for having an untidy kit.

After that, things got better. We had plenty of books to read so I was reading all the time. The only trouble was that although there was a good canteen and one could get lots of things to eat or drink, I hadn't got any money because my pay book had been kept in the regiment. Without the pay book, they could only give me ten shillings a week which didn't go very far.

When we had been there for a bit, the doctor came round a bit, the doctor came round one day and said he'd do the skin graft on my leg the next day. So I was anaesthetised and went off to the operating theatre. Then they shunted me out again and the doctor came along and said, "Look, your wound is not quite ready, it's not clean enough. I'm going on a week's leave, I'll do it when I come back." So the following morning I stood to the end of the bed when the doctor came round, a different doctor and he said, "How do you feel Gunner?", and I said, "Fine, thank you Sir." Thought no more of it. And that evening, my next door neighbour, Sapper Jones and I were in the cinema. It came on the screen - Will Sapper Jones and Gunner Perks report to reception immediately. So we thought, what on earth have we done? Anyway, off we went. And they said, "Draw your kit, you're going off to convalescent camp in the morning." So, my kit was a bit torn and bloody but I still had to put it on.

And off we went to the convalescent camp, which was number two at El Balla on the canal. It was a horrible unit, the commander was Major Watts-Waters who was a prison doctor at Dartmoor prison in civvy street. And his idea was to make it as unpleasant as possible because he reckoned we were all malingering and the nastier it was, the sooner we would get fit and go back to work. Well, the doctors there weren't any good; they were ones that had been found to be no good in their units and had ended up there. But one who seemed slightly better than the others eventually said to me, "I don't think you're getting any better, I am going to send you back to hospital." So I said, "Oh please don't do that Sir, can't you send me to number five convalescent camp?", which was one we all knew about, which was at a place called El-Arish on the coast, just where the coast turns round toward Palestine. So he sent me there and that was as different as could be. Both units militarily were the same but there was no compulsion there - you didn't have to wear boots, you didn't have to do guards, you could swim all day, there were various sporting facilities. As a result of which, we all got fit in no time and went back to duty, as I eventually did - back to the depot.