Oliver's time in the Royal Artillery from his posting to Weston-super-Mare in 1941 until his evacuation to Cairo in 1942.

Blogs 1 through 4 cover this period in more detail. 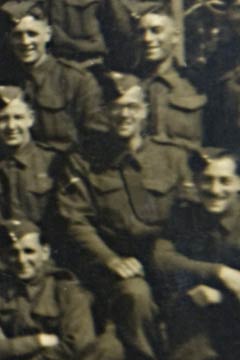 When I was rejected from the 123 OCTU (Officer Cadet Training Unit) at Catterick in February or March 1941, I was asked whereabouts I would most like to be posted. I said that as a Bristolian, anywhere in the south-west area would be fine. After a week's leave, I was posted to Weston-super-Mare; that seemed fine. I reported to RHQ, arriving in my father's (normally) chauffeur-driven Humber 'Snipe', but leaving the car some distance away as it kind of looked too posh for my rank of unpaid Lance Bombardier!

The first thing that the RSM said to me was, 'You know that this mob is under embarkation orders.' I did then! I was put into 285 Battery under C.O. Major Harry Clapham. I was a gun-number in A-Sub section where the No. 1 was Sergeant Moore, by trade a shipwright at Swan Hunters on the Tyne.

After a week or two, we started to polish up a bit as we were told that, before our departure, we would be inspected by the King on the beach lawns at Weston-super-Mare on. On the day, I was kneeling to attention by our gun, unable to turn around, so I didn't even see him!

A few days later was departure day. The regiment was marched to the railway goods yard at the Weston station to entrain. I had been left with a small party in our billet to oversee that it was left clean, and we joined the regiment shortly after and boarded the train. There were eight of us in the compartment and we all had two kit bags, tin hats and gas masks, so it was fairly cramped. Eventually, when it got dark, we all slept - after a fashion. Time passed and, as it began to get light and we woke, there was speculation as to where we might be. Some said Glasgow, others said Liverpool; in both cases, the town name was preceded by the usual Army adjective! In fact, we were still in Weston-super-Mare, the train having not moved at all!

Later we moved off and did, in fact, end up in Liverpool where we boarded HMS 'Empress of Asia', a Canadian-Pacific boat on its first trip as a troop carrier. (Previously it had gone from Vancouver to Yokahama.) It was a coal burner, the scratch crew from Liverpool never being able to get it going very well. In the mornings, the ship was always lagging behind the convoy and how we weren't torpedoed is a miracle!

From Liverpool, we sailed up the Clyde to anchor for a couple of days before finally setting sail. Our troop 'A' of 285 Battery, commanded by Captain Angus Wood, occupied a mess deck roughly on the water line. Captain Wood was an excellent chap who had escaped the disaster at the Gazala battle before joining the 124 Field Regiment. (He was later killed near Nijmegen in The Netherlands, in the 'Market Garden' operation.)

The sea journey was largely uneventful. One morning, we noticed that HMS 'Highland Chieftain' had been in collision with 'Dominion Monarch' during the night; it left us at Freetown (Sierra Leone) where we were to make a brief stop. Some men went ashore; others sold bits of kit and blankets - through the open portholes - to the dock workers.

After a few days, we set sail towards the Cape, heading for Durban. A few days off the Cape and making no headway in the heavy seas, we ended up - much to everyone's relief - entering Table Bay. I was on deck preparing to anchor and was surprised to see the anchor-chain run right out, including the last link of the chain. It meant that we had to travel a bit further in to the Capetown bay and operate the other anchor - rather more successfully! When we had come alongside, all the stokers immediately deserted the ship (it was stoked from there, all the way to Port Tewfik in the Suez, by the army).

After a day or so at Capetown, we sailed on to Durban and were able to go ashore, where we found the locals to be most hospitable. Up the east coast of Africa, it was very hot and we slept in our hammocks on the deck. You had to be quick to grab a space before it got dark. You also had to look sharp in the mornings, as the crew hosed down the decks at an early hour.

When we arrived at Port Tewfik, we disembarked into lighters and, while we were waiting to get in, we saw the Colonel - Lt Col Mould-Graham - coming down the gangway. At that moment, a sudden awareness of our sheep-like situation broke upon us and we all started to cry 'baaa-a-a'! The Colonel thought that we were 'taking the mickey' out of him but we had not intended to insult him at all - it was purely spontaneous!

We then 'em-bussed' and were driven to a tented camp at Qassassin, where we remained for a week or so while our guns and trucks arrived. Here there were no facilities other than a NAAFI canteen and a barber. This was at about the time of the battle for Crete, and the authorities thought it likely that Cyprus was vulnerable, as at the time the only troops there were a company of Sherwood Foresters and a squadron of the 4th Hussars, with obsolete mark VI light tanks.

We were taken on to Alexandria and we embarked on the HMNZS 'Leander', a fast, light cruiser which sailed us rapidly to Famagusta. Soldiers had great difficulty moving about below decks with all their equipment, but we just managed, with even one or two meals taken in bed! We had tons of New Zealand butter, of course!

In Cyprus, we dispersed to an area near Nicosia where we settled in an olive grove. We went out daily all around the island, ready to repel any landings by the Germans. We always stopped at about midday for tiffin and a swim. On one memorable occasion, we had to make our way into the water over large round boulders which were coated with green weeds - the only way was on all fours until the water became deep enough to swim in. But, seen from behind, it was quite a hilarious sight of the battery in the water, led by the Major, as we had no bathing costumes!

On occasions, we got into Famagusta (the old Turkish town was out of bounds) where the NAAFI had based itself in the castle, called Othello's Tower - it was medieval and most impressive. After a month or two, a few of us were sent on a gas course in Egypt: we were a party of three: a sergeant from the Durhams, a corporal (Elstob) from the 4th East Yorks - and me. We found ourselves in transit at Abbassia barracks in Cairo, with only Cyprus money on us, which the NAAFI would not accept. However, the Durham Light Infantry sergeant - being a Scotsman, as was the storeman - was able to come to a satisfactory arrangement!

The next day, we made our way to Helwan where the course was to take place. I only remember one thing from the course: the instructor saying that if the enemy were to spray liquid mustard gas over a tented area during the night, any troops who got up to go to the latrines would get burns on the soles of their feet. At this piece of information, the following exchange took place: A sergeant (Australian) raises his hand. The lecturer says: 'Yes, Sergeant? What is it?' The sergeant says: 'They don't go out. They use their boot.' The lecturer: 'Thank you, Sergeant.'

After the course was over, we tried to get back to Cyprus. However, the division was on the move to Palestine and we were stuck in the transit camp at Port Said - with nothing to do! The only cinema was showing Judy Garland in 'The Luck of the Irish'. It wasn't a brilliant film, but we stayed to see it three times, from sheer boredom!

We eventually got moving and rejoined the regiment near Haifa. We had to have the guns calibrated so we drove down to the range near Jericho. Calibration is a tedious process and our gun was taken for a fuller test than all the others. When this was completed, we went down to the Dead Sea for a bathe - not a swim, of course, which would have been impossible - but it was quite an experience. I had had a nasty rash on my feet which was quite cured by the salty chemicals in the water.

The division was due to go next to Iraq (Persia, as we knew it) but at this time, things were not going well in the desert, as a result of which 150 Brigade - made up of 72nd Field Regiment, four of the 5th Green Howards and four of the 4th East Yorks regiment - were sent into the desert. We spent a few days at Ma'aten Bagush, west of Alexandria, then proceeded in great discomfort, up the railway, to the railhead which was in the desert a few miles south of Sidi Barrani. We eventually took over a lot of well-worn equipment: trucks and guns from a regiment from the 4th Indian Division who had formed a 'box' in the Gazala Line. At some stage, too, we were based near Bir Hakeim which had been a French position. They had been very worried about an air attack and the position was very widely spread.

From the 'box', we took part in an operation intended to take pressure from Malta - which was also in a bad way. We set off to attack the German airfield at Martuba to draw their planes off the convoy approaching Malta - and at this, we were most successful! We spent all day being attacked by JU87Bs (Stukas) as well as ME109Es and 109Fs - during the course of which we suffered casualties - including myself.

I was eventually evacuated to Cairo via Tobruk in the hospital ship 'Lanovery Castle'. As we were leaving Tobruk, there was a Stuka raid. We were very near, but it missed us. This was a very unpleasant experience for a non-naval chap like myself. During the sea journey, a nurse asked me whether I would like to shave, my reply being that I had lost all my kit. 'I'll see what I can do,' was her reply, and she soon returned with a basin of lukewarm water, a razor and some soap. 'You'll have to manage with this,' she said. No mirror - so I spent a tedious time hacking away sightlessly, after which the nurse looked at me and said, 'You look a lot younger.' I was 22 at the time!

As a result of my injury, I was back in the 63 General Hospital in Cairo when the real battle started. The 150 Brigade 'box' was cut off from the rest of the division and was overrun. 72nd Field Regiment, the 5th Green Howards and the 4th East Yorks were all decimated. A few of our chaps from the 72nd FR got away and joined 124 Field Regiment (our second-line regiment) but the 72nd - the infantry battalions - were never re-formed. Our troop commander Captain Angus Wood also joined 124 Field Regiment. I actually spoke to him later in Normandy but, as I said earlier, he was soon to be killed in the 'Market Garden' operation at Nijmegen.