Blog 6 is a transcript of Podcast 6. 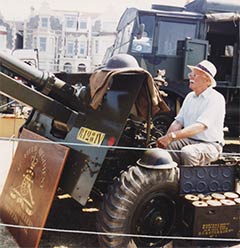 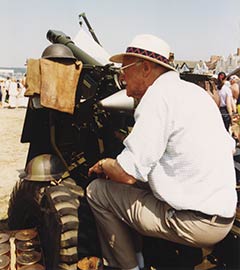 After a slight interruption, the course at Abbassia barracks, was really rather interesting as the old barracks had actually been used and I think built by Napoleon when he occupied Egypt in around 1805. The only drawback to the barracks was that there again bed bugs were rather prominent. But on a Sunday morning, an orderly came round with a blow lamp and ran the torch around all the joints on the steel bed frames, the bed bugs didn't enjoy that.

It was quite an interesting course on the Stuart tank (the M3 light tank, named after General J. E. B. Stuart, who was famous for his exploits in the Confederate cavalry during the American Civil War) and we had a good deal of driving. But at the time it so happened that I had a fairly severe attack of what, us troops called gyppo gut, which if the officers had it was called gyppie tummy but it was exactly the same. That was rather difficult because we were attending in a class and being lectured but one had to leave fairly often for brief intervals. Anyway, it was quite interesting on the General Stewart tank and we had a day out driving over the desert.

It happened actually while what was known as the 'flap' was on, when Rommel was very near the El Alamein line and things were rather difficult. There was supposed to be smoke going up from GHQ where they were burning all their manuscripts thinking they might have to get out in a hurry.

An evening with Mr. Fanner

During that period, a friend of my father - Mr. Fanner I think his name was - he had been a solicitor who had looked after the affairs of the United Yeast Company, who had had an egg production unit in Cairo before the war. My father had got in touch with him when he was notified that I had been wounded. As a result of which, I was invited out for an evening for a meal with Mr. Fanner, which was really rather daunting because it was while the emergency was on. He was in a sort of local defence thing in the rank of Colonel. When we sat down to dinner, he had two lodgers both of whom were Staff Colonels in GHQ, and me as a Lance Bombardier in my boots and so on; I found that slightly embarrassing but he was very hospitable. Eventually he drove me back to where I got the tram back to the barracks.

Anyway, after I had finished the course, I was posted on the 22nd of October to the Tank Delivery Regiment, 8th Army, which normally held a number of light tanks for forwarding. But it was the day before the opening of the Battle of El Alamein (23 October - 11 November 1942). All their stuff had gone forward and there was nothing to do. I had visions then of being sent forward as a very unskilled but recently trained tank driver, to go to a RSA (Royal School of Artillery) arrangement. But the following morning my posting to the Middle East Officer Cadet Training Unit came through and I had to go back to the depot. That was a bit of luck really. But anyway, they hadn't many jobs going at the time.

Very soon after that they found plenty of jobs because we were used to escort prisoners back to the prisoner camps in the area of Suez. Two of us, a gunner and myself, were detailed and off we went and picked up a big wagon-load of about 30 Italian prisoners who were really in a very demoralised state. They were no great trouble. We didn't have to watch them very carefully. But the interesting thing was that the chap I had with me, the gunner, I found was chatting with them very freely in Italian. I asked him what was going on and he said that he was Italian; that he had been born in England but that his parents were Italian and had moved to England, and he had no sympathy for these chaps at all. Although they were the same flesh and blood really, he just thought they were a poor, miserable, misguided lot.

Anyway, we got rid of them and two days later we went up again and picked up a load of Germans who were very different. They were still very much soldiers and we had about 20-odd of them. And a Sergeant Major, I think his name was Sergeant Major Pietz. But they were still soldiers. Anyway, he could see at one stage that I was counting these chaps to make sure that we had still got the right number because I couldn't help feeling that they might make a run for it. When he saw me counting, he made them sit to attention and number off all the way round; ein, zwei, drei, etc. When we got to the end, the last one was one more than we were supposed to have. So although we didn't have much language communication, he made a gesture to suggest cutting their throats and throwing the overboard to get the numbers right, which I thought was pretty German. But we didn't anyway. That trip was quite successful.

Then after a brief period I went off up to Palestine to Sydney Smith Barracks at Acre, just north of Haifa and started the two months of very unenjoyable OCTU (Officer Cadet Training Unit) training sessions.