Blog 7 is a transcript of Podcast 7 combined with an unpublished article that Oliver wrote about the story of the purple hose tops. 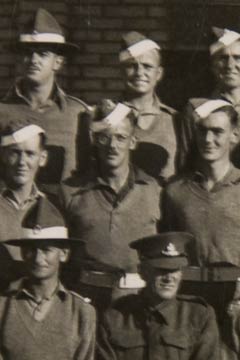 March 1943: Gunners at OCTU (Officer Cadet Training Unit) at the R.A. base depot at Almaza, on the outskirts of Cairo. Cadet O. H. Perks (centre).

The train from Cairo to Haifa - getting left behind in Sinai

My journey to the Middle East, OCTU (Officer Cadet Training Unit) at Acre in Palestine just north of Haifa, started in effect by getting into the train; the 2 o'clock train from Cairo main station, which went to Haifa. We set off in the usual way, rather slowly and bumpily.

When it was quite dark and about half way across the Sinai, after several stops and rather jerky starts, we were in the last coach, we suddenly realized that we were all on our own - that the train had gone and that there we were, on a single track line and sitting in a coach all by ourselves. We thought this wasn't a very good thing in case the next train came along and shunted us. However, after a bit of waiting we heard a distant chuffing and in due course the train came back and reconnected us. We went off all in one piece and eventually arrived at Haifa.

Course at OCTU - an Australian's struggle with his gas mask

On arrival at OCTU we were mustered or whatever on the first day. We were addressed by the CO, the Lieutenant Colonel, who's name escapes me. The gist of his remarks were that we were the scrapings of the barrel, that all the best potential officers in the Middle East had gone through the course and that they had to make the best they could of us - which wasn't terribly encouraging. Anyway, we started on our various duties, which were pretty time consuming and boring.

On one particular outing or exercise we were on - there were about twenty of us in the squad - the Captain, who was a South African and not a very warm man, suddenly while we were at ease sitting, said "Gas!" Well that meant that we had to put our gas masks on, which was no great problem to most of us; we had to wear them in full kit, and all the UK cadets were properly trained. So the gas masks, which had two press studs at the back that were not supposed to be done up, so that you could get the mask out very quickly.

Anyway, one Australian - a nice chap called Leo Riedel if I remember his name - being an Australian had never had his gas mask out. The press studs were still pressed and he couldn't manage to get it open. He would have been in terrible trouble, so while we were still standing and waiting, he hid behind the squad until the thing was over and the gas alert was finished and then he joined the rest of us. But if he had been discovered, it would have been a terrible black mark.

December 1942: Swimming with the Australians, a march with full kit and assault course

At that time, there were still a large number of Australian cadets, who half way through the course were withdrawn back to Australia to fight in New Guinea. A lot of New Zealand cadets were still there until the end. But at Christmas 1942 I think, some of my Australian friends thought it would be a rather good idea to have a swim in the pool. Well, the pool in December in Palestine is not very warm. For the honour of the Pommes I joined them and we all had a swim, which I didn't really enjoy. But anyway, honour was reserved because normally they referred to us as 'bloody pommy bastards'; but anyway, I survived that.

Later on we had a terrible competition thing for squads against squads in which we did a forced march with full equipment, and immediately on the turn you then had to go over the assault course. Well, on this particular thing, towards the end of the march, some of our chaps were getting rather exhausted. So two of us, an Australian and I who were about the biggest in the squad, carried their rifle so that for the honour of the squad they would be able to complete the course and not lose team marks. Well, it was all rather a waste of time because when we got to the end, they were too knackered to do the assault course. So we had carried their rifles for them for many miles at some speed, all to no end.

The importance of drill and 'idleness'

One of the things about the Middle East OCTU was that drill was fairly important. Most of the NCO's were guardsmen, or many of them were. And drill was very serious. Even if you were on parade, if you stood easy you were not allowed to put your hand up to give your hat a slight twitch so it didn't fall off. We also had to march with our swagger canes, which if they fell on a parade ground, you were not allowed to pick them up. And a cap with a white blanco band, which had fallen on the square during marching, and which had had a couple of squads march over it, doesn't look much improved. We managed to survive that, being told that we were extremely idle. When anything was wrong you were told you had "an idle pair of boots" or an "idle rifle" or whatever.

The story of the purple hose tops

About the only time in OCTU that I did enjoy, which was really funny, was when the whole of OCTU were gathered in the camp theatre for a lecture on regimental tradition and history by CSM (Command Sergeant Major) French of the Essex Regiment. He told us about the Glosters* with their back badge, and the Royal Welch Fusiliers who had a bit of stuff down the back of their uniform to stop their pigtails making it greasy and so on. Then he asked, because this was something to do with the Essex Regiment in which he served, in a cockney accent, "Which famous regiment of the British Army wears purple hose tops?". These were like our stockings, which were normally khaki.

The correct answer should have been "The Essex Regiment Sergeant Major!", but instead the Essex Regiment Sergeant Major, in a loud voice from the back of the hall, obviously an Australian, called out "The Gallabat Harriers, Sergeant Major!" Well, this caused absolute uproar, because everybody there knew that the First Battalion of the Essex Regiment, when being bombed by the Italians outside Gallabat on the Sudan-Ethiopian border in November 1940, had got up and, the expression was at the time, 'hoofed it to the rear' and had great difficulty in being stopped. Well, that never appeared in any paper or newspaper, but every soldier in the Middle East knew about it. Of course, the Sergeant Major (who was not well-liked) was most distressed. He went the colour of his hose tops, and shouted, "Who said that? Take that man's name!" But of course, he was wasting his time. His lecture was completely ruined, but it made our day.

* The Gloucestershire Regiment was nicknamed "The Glorious Glosters".

December 1942: Exam results and the Royal School of Artillery at Almaza

When we had night exercises - December in Palestine is pretty muddy and damp - we'd come in at perhaps one o'clock in the morning all filthy and sit there cleaning up and polishing the barrack room, because it had to be up together by about five or six o'clock in the morning. I suppose it was all good practice. Anyway, eventually we were told about the results of the final exam and told that some people would be kept on for another month. My reaction was to hope that I had failed altogether rather than to have to go through another month. But fortunately our course all passed.

The infantry people went off to do further infantry at the infantry depot. Those of us who were in the Gunners then went off to the Royal School of Artillery branch at the Royal Artillery base depot which was at Almaza, on the outskirts of Cairo. There we worked hard, but were treated as human beings and had a good deal of time to ourselves to go into Cairo and eat and do quite nicely. None of us were very sorry to finish at Acre.