Blog 8 is a transcript of Podcast 8. 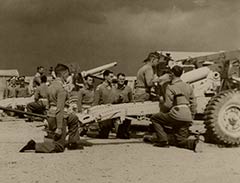 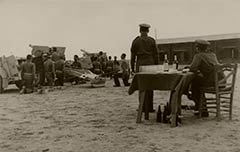 April 1943: Gun Laying Competition, R.A. OCTU, Acre, Palestine. Oliver can be seen on the gun furthest from the camera.

January 1943: Royal School of Artillery at the RABD and Tiger Jarvis

When we had finished at the OCTU in Palestine, we came for three months gunnery at the Royal School of Artillery at Almaza, the Royal Artillery Base Depot (RABD) - generally said to stand for 'bed down right away'. We were treated rather better here, they being slightly more civilised people.

But we had to work hard; an early morning gun drill at about six o'clock, which was quite energetic. If you got it wrong you were shouted at very loudly by the Sergeant Major who was called Tiger Jarvis. He was a little lively chap, who joined the Army as a Bugler; many of the senior NCO's had actually started that way. On one occasion when we were doing gun drill and one of our party had made some grave error, Tiger made him stand on the trailer and shout out at the top of his voice, "I have loaded my gun when I shouldn't have done, and I am a shit." This caused considerable amusement to any of the ordinary gunners in the depot who happened to be passing by at the time.

We used to do regular exercises out in the desert along the Suez road, where there were all sorts of well known landmarks such as the Remarkable Rock, Jebel Suleman and Virgin's Breasts, all of which were marked on the map. That was quite useful. We also did of course gunnery theory. The paperwork involved working out barrages and so on, which involved a certain amount of trigonometry. We had an instructor in gunnery, Major Pope, who was a very bright chap. He was a ranker who had made the grade up as a gunnery instructor. He used to say when we were struggling, "but Gentlemen, it is all too easy". It seemed all right for him, but it didn't seem like that for us.

The mess near Cairo: a leaky corrugated iron roof, brandy and ginger

On one occasion when we were in the depot, an unusual thing for Cairo happened; we had two days of heavy rain. Some of the tents which were certainly dug in got flooded. We weren't in our tent, but we had an Egyptian bat man called Abdul - you never saw anybody so miserable. He wasn't used to wet weather. The other point was that the RA mess where we gathered and so on had been recently re-built with a corrugated iron roof, but the people weren't used to the conditions. So the corrugated iron was nailed down, but instead of being nailed through the tops of the curly bits, it was nailed through the bottom. So when it rained, the rain just poured in and more or less just flooded the mess completely. The other thing about the mess was the drink. I acquired a taste then for what was the cheapest drink, which was brandy and ginger. This was based on Cyprus brandy, which cost I think three shillings and sixpence a bottle, and which was really decent stuff; I've had a liking for brandy and ginger ever since.

May 1943: Commissioned, kit allowance spent on high living in Alexandria

Eventually I was commissioned as we all were. You got a fifty pound kit allowance, which was meant to buy all your uniform and winter kit when you eventually got back, if you ever got back to the UK. But in fact, all you needed to spend on being commissioned was the cost of two cloth pips on your epaulettes, which was about half a quid. And you were then an officer. So most people spent the allowance on having a weeks leave and high living in Alexandria, which was what we did. One very sensible and far thinking chap decided he wasn't going to squander his money. He did a trip up the Nile, down to the ruins and so on and had a very educational week. But I'm afraid we enjoyed our week in Alex.

When that was all over, we were back in the depot. The first thing that happened then, many of us were on an MT course in which we learnt about what went on in the tractors and so on, which was quite interesting. Then the Sicilian campaign started with the landing day invasion on the 10th July 1943. Most of us were then on draft to Sicily. That was quite interesting and we spent quite some time in a transit camp, which in fact was just a lemon orchard in Sicily, with very little to do apart from dig our bed spaces down a bit because there was a raid every night over Catania and Syracuse. Much of what had been thrown up at the aeroplanes came down in our neighbourhood.