Blog 9 is a transcript of Podcast 9. 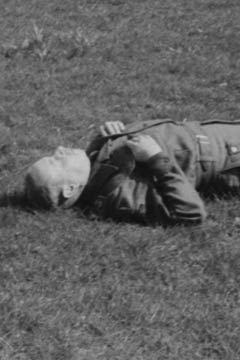 On one day while we were still in the reinforcement camp in Sicily, it was one day on what would have been the August bank holiday. And some of us thought that we would have a picnic. So we drew some rations and went down to the nearest beach; while the other unlucky people about 5 miles down the road were having a battle, we sunbathed and swam and had a nice picnic on the beach. That didn't last for very long, and after a bit two of us in particular, Eric Morrow and myself were sent off to join the 90th Field Regiment, which were just down the road.

We were then introduced to this unit just as the battle was beginning to come to an end. So we went before the CO and he just looked at us and didn't say very much, just that we must do our bit. His name was Lieutenant Colonel I.G.G.S. Hardie DSO. A good chap, but not very communicative. One of his favourite things was when people asked him about some particular problem; he would say "I don't know old boy, I don't know", which wasn't very helpful. From then on we did a few things with the regiment until the campaign finished.

Leaving the trucks, time in Carruba and the wooden signs made there

I was detailed to take a party to leave our trucks - we were obviously going to go back to the UK - to leave our trucks at some depot. I set off with my maps and got about half way and then found that there was a one-way circuit. So then I had to turn round. And I could tell from experience that all the blokes were saying, "bloody officers, got no idea". So we had to turn the whole column round and go back through Messina, we eventually got there.

Then we moved back to a little village called Carruba where we stayed in pleasant conditions for some weeks. The coffin maker in the village did quite a big trade in regimental wooden signs, one of which I have, a Royal Artillery sign. The Battery had a whole lot of them to use on the move to mark our directions. Unfortunately, they were all lost because later on, on liberation day when we arrived in Brussels, as soon as the Sergeant Major put out our beautiful Battery signs, the locals nicked them for souvenirs. But I have still got mine and value it.

While we were there, we spent most of our time on the beach swimming until the summons came, and off we went down to Catania, where we embarked a ship.

Red wine, a long sleep and a clear head for marching

The day before we embarked, we came down to the holding area, which was a tented area near Catania. About five of us went off to a wine shop, where we had a great deal too much local red wine. One of the party more or less had to be half carried back. Anyway it was then about six o'clock and I got down into my bivvy, and my bat man came up with my dinner, which I didn't really want. So I ate it to save it being wasted and went off to sleep. Then didn't wake up until about six o'clock the next morning, when we had to march into Catania; and I've never felt better in my life.

November 1943: Return convoy to the UK, arriving in Avonmouth

Then we had our trip back to the UK. Looking in, we just stayed off Algiers briefly and had a look at the town. And then on back home and round the north of Ireland. And then the convoy split up there, and our ship then came on down and I got up one morning and looked out and we were sailing up the Bristol Channel between Steepholme and Flatholme, and in due course came into Avonmouth. As it happened my mother had been on the quay the day before with the WVS (Women's Voluntary Service), dishing out kit to shipwrecked sailors. If she had seen me she probably would've had a fit because as far as she knew, I was still in Italy.

Military police and the Duke of Beaufort on the quay

On arrival, it was rather funny. There were a lot of military policemen on the quay and ours were some of the first troops to come back from the Middle East at all. Somebody started with our troops taking the mickey out of the police, shouting out, "Yaaah, pale face!". They were very embarrassed, but they couldn't do anything about it, but it made them look a bit silly. Then the colleague with whom I was looking out over the rail said, "There's a chap down there in the reception party who looks like a Major in the Household Cavalry or something". I couldn't think who it was, I learnt afterwards of course that it was the Duke of Beaufort, the Lord Lieutenant doing a see-on of welcoming us back home, and as a Bristolian, I should have recognised him.

Many years later when I was selling Rolls Royce and Bentley's I had dealings with him. I could if I'd had the courage have mentioned this, but I never got round to it.